RS Perry was born in Michigan and brought up by his grandparents who fostered in him a love of books, the natural world, and travel. However, in 1966 more of his time was being spent on cars, sports, and moonlighting in the General Motors factory than on school. Finding out he was about to be drafted, he decided to enlist. On the advice of a recruiting officer, he attended basic training at Fort Knox, then infantry training at Fort Gordon. He was accepted to Special Forces and was scheduled to transfer to Fort Bragg after attending jump school. While waiting to transfer from Fort Gordon to fort Benning for airborne school, he acted as the clerk for the Special Forces recruiter and started sky diving in South Carolina on weekends. During this time, he was asked to an interview where he was recruited to Officers’ Candidate School. His first question was whether he could then go to special forces as an officer and was told that he could not. Officers in special forces at that time did not come from inexperienced lieutenants. After much thought, he accepted the invitation to OCS and transferred back to Fort Knox for armor training. After this he 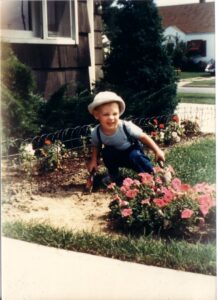 was assigned to Fort Huachuca, first as a radio, cryptographer executive officer and then in charge of the Huachuca Youth Association. After 10 months he received orders to report to Oakland and then to South Vietnam with the 25th Infantry Division at Cu Chi. At the end of his tour, like most surviving First Lieutenants, he was offered a promotion to Captain if he wanted to continue in Vietnam. By then he wanted to see what the “world” still looked like and left the army in 1969, taking with him lessons learned about self-discipline, self-reliance,  a respect for efficiency, and lateral thinking. One of his more fun assignments at Fort Huachuca had been to manage the Fort Huachuca Youth Association, which included booking entertainment groups in clubs. On his return from active service he moved to the West coast, setting up as a music promoter. He later moved to Seattle buying and selling commercial real estate and businesses, which included clubs. He soon realized that the smoke-filled, nocturnal life of clubs and gigs was not for him, and decided he was finally ready to pursue a better education.  He enrolled at a community college and then transferred to the University of Washington first in the art department and then moving to the Earth Sciences department where he worked in his future mentor’s remote sensing lab.  He pursued a self designed degree that encompassed three departments; Astronomy, Earth sciences, and Molecular biology at that time called more simply-Microbiology. He received a BS and followed by an MS.  But the way to financial freedom seemed not to be not at the university, but rather as his own boss so he decided to pursue his interest in Art and painting . He and his then wife Karin developed a chain of art

galleries and picture framing stores in and around Seattle, Spokane, and Portland. The stores were successful. They were followed by a national distributorship. While the work was exciting and interesting, not to mention 18 hour days and 7 day work weeks, he was already moving on to his next project. In search of seclusion and retreat and with the idea for a novel, he bought a remote ranch near the Pasayten Wilderness in North Washington, close to the Canadian Border. Here, in a change of career, he began a llama breeding business and spent the first winter in a hundred year old pioneer’s log cabin reading and working on what would become Off The Edge. He says the seclusion and serenity of the snow filled canyon was bliss except for the trips to an old outhouse in the sub-freezing temperatures! He then designed and built his own house and barns, grew hay, built fences and acted as vet to his increasing variety of animals including horses, cows, llamas, alpacas, reindeer, and camels. He has always referred to it as hard work but good work. When ranch work allowed he went skiing and hiking in the mountains and then 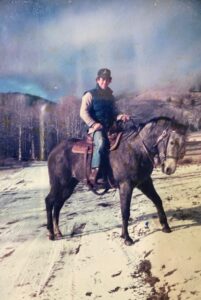 gained his pilot certification in fixed wing, single and twin planes and rotary craft-helicopters, and an instrument rating. All to make it easier to get over the mountains to the city. A fifty minute flight verses a four to five hour drive depending on weather. He became well-known as an early llama breeder and wrote articles for Llama Magazine but a chance meeting with one of his graduate mentors, John Adams, now a retired geology professor and living unbeknown to either of them only a few miles away in the Methow Valley, Washington State, set him on another path. A few months later, He was back at the University of Washington in the PhD program in the fall of 2000 with his previous molecular biology advisor, James Staley, and now head of the Astrobiology Program. Randall was struck by how much science had changed particularly in microbiology. Microscopes had been replaced with molecular biology labs looking at the genetics rather than the physical characteristics of bacteria. Other subjects had not changed as much, but the amount of information he had forgotten and needed to relearn was daunting. He was described by his Professor in the University of Washington’s Microbiology Department, as “the most inquisitive person I have ever met,” and this curiosity led him to want to find out about “life,” the universe and everything. In 2004, he received a PhD in Earth Sciences along with a NASA certification in Astrobiology. He has spent time at several NASA facilities. The variety and possibilities of Science had hooked him and since then he has been attached as a Research Scientist to the Planetary Science Institute, Tucson, Arizona, and later as a US National Science Fellow at Oxford University and then for three years as a Royal Society Fellow at Imperial College London, England. He was short listed for the Arthur C Clarke award. He is currently still on academic staff at Imperial College London as a Senior Research Investigator. He has written many papers 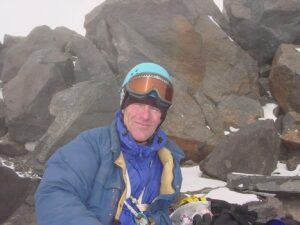 on topics ranging from The Definition of Life to the possibility of life on Mars, the survival of microbes in extreme environments and the formation of rock coatings. Always interested in the whole picture, some of the favored subjects in his talks or articles are the connections between Science and Technology and Language, Art or Philosophy. Education and learning became an important area of interest and he supports the concepts of constructivist learning and math education. Determined to excite talented youngster and give them a step up, he began a competition for school students, the UK Space Design Competition. for students age 15 to 18. Several months later he founded a UK charity called the Space Science Engineering Foundation (ssef.org.uk). He credits the success of the competition firstly to the students who are motivated to add to their knowledge, and second to the willing volunteers who spend so much of their time to make it a success ( many have stayed donating their time since its inception). The charity has expanded to include a junior competition for 9-14

year olds called the Galactic Challenge (gchallenge.org) as well as expanding throughout Europe (eusdc.org), the Middle East  andAfrica  (africasdc.org).  More recently he started the Global Space Design Challenge and  is its Company Director. However, Dr Perry is definitely not the stereotypical sedentary academic. He has dived to the bottom of the ocean in the US Navy-owned deep submergence Vehicle Alvin, climbed in Nepal, the Andes, and to the top of Mount Rainier, sailed across the Atlantic and traveled in many hot and cold deserts and jungles. He is  musician, and painter. As well as pilot’s certifications he is Scuba and Sky Diving certified and is a member of Writers Guild of America West in Los Angeles and on IMdB. Many of these topics find their way into R S Perry’s Jim Johnson novels and his experience gives them realism and accuracy. In 2012, going back to the idea he had in the log cabin, he completed Off The Edge. The novel met with a positive reaction from its initial readers and there is also now a film script in development. A sequel, Over The Line soon followed and then Out 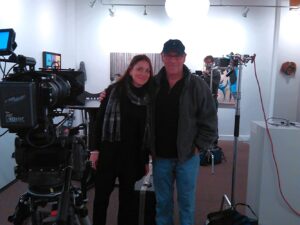 Of Time, forming a trilogy. And followed by a fourth novel Ecuador. A fifth novel in the series is slated for published in fall of 2020. He is involved with a film company in Vancouver, British Columbia. He acted as the executive producer for a documentary film about a First Nation Canadian Artist called Meet Beau Dick, which was an official selection at the Vancouver Film Festival in 2018.  He resides in Vancouver BC.

Photos top to bottom: RS with Corky, Happy gardening in Flint, Michigan, Research in the Queen Charlotte Islands, BC, in the tidelands spanning the Triassic Jurassic extinction, riding with  Jonny on Wolf Canyon Ranch, sitting on the 14,411 foot summit of Mt Rainier, Washington, judging a Galactic Challenge, a UK charity for 9-14 year olds where they design a space settlement on the surface of a planet, moon, asteroid or a cycler in our solar system, filming set with Natalie Boll, Vancouver, B.C.