The subject of RS Perry’s latest adventure novel, Ecuador -Pandemics, viruses, and the world’s greatest viral killer.
Deadly pathogens: viruses, bacteria, and prions; play a part in all of RS Perry’s Jim Johnson adventure books. Ecuador, the author’s fourth book, is no exception. With viruses very much on our minds currently, a thriller that casts a killer virus in a starring role is indeed both relevant and timely. 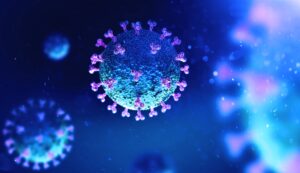 Living through the present-day coronavirus (photo left) pandemic, and experiencing intensely the effects of Covid-19, leaves us wondering when it will end, how bad will it get, and will our friends and family become infected? The mystery of what our future will be, leaves us feeling uneasy. We can’t predict the future any more than the team at the Biological Warfare Center can as they struggle to trace a virus in RS Perry’s latest novel, Ecuador.

Novel coronavirus strain, Severe Acute Respiratory Syndrome (SARS-CoV-2)  viral infections. which cause the disease Covid-19 (2019).  Mortalities are increasing daily. The death toll from coronavirus in the US has far surpassed the US death toll from the Vietnam War and is quickly approaching the estimated death toll of US soldiers both in Vietnam and Korea. It must be noted that the US casualties are only a small portion of those killed in the Korean and Vietnam wars, where the combined death total, including civilians, is estimated to be as many as 7 million.

The mortality numbers from wars, however, pale in comparison to those of the deadly viruses. Throughout history, viruses have killed far more people than all wars combined. The greatest viral killer of all time is smallpox, or Variola major. In the 100 years before a vaccine, smallpox killed approximately 300 million people—nearly the current population of the United States. Historically, smallpox killed an estimated total of 500 million people. An incredible figure given that the world’s population was much less than it is now. During that time, parents often did not bother to name their children until after they had survived the scourge. Could there be even more lethal viruses waiting to jump species, mutate, or be genetically engineered? Could this novel coronavirus mutate into something much worse than it already is? 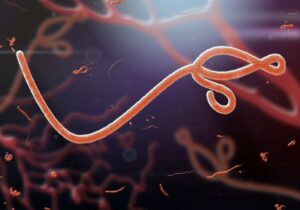 Viruses need to live in host cells. They are just small packets of either DNA or RNA. The RNA containing coronavirus we call the novel coronavirus (novel meaning new), that causes Covid-19, is similar to other coronaviruses that cause SARS and MERS. Aside from coronaviruses, there is a long list of existing dangerous viruses lurking in the shadows – Marburg (top photo) and Ebola (pictured left) as two examples. Any of these, and dozens of others, could suddenly mutate. Rabies virus, which we have all heard of, could be extremely dangerous. There is no cure and it has a nearly 100% mortality rate. What if it became highly transmissible through a mutation or combination with another virus?

How deadly were other virus pandemics?

However, the new coronavirus is not likely to kill as many as either Variola major or the 1918 H1N1 flu virus. Not likely is the key word. There are already indications that novel coronavirus in the US is mutating. It could either become more lethal, or a mutation might not be beneficial, causing it to die out. Our wide ranging and sophisticated medical technology may be able to stop this virus, but we have to be prepared for the fact that it might not.

Can old viruses still infect us?

An effective vaccine and a concerted effort lead to the eradication of smallpox in 1980. Smallpox had a weakness that was exploited, and consequently this once lethal disease is no longer a threat – Or is it? As stated in Ecuador, “Allegedly, there are only two places” that have stocks remaining of Variola major: “the CDC and the Russians’ facility at Zagorsk.” The CDC alone has over 400 strains in their freezers. Could there be more still sitting in frozen limbo in freezers around the world? What if these were to escape? Could smallpox still be a danger to humans? 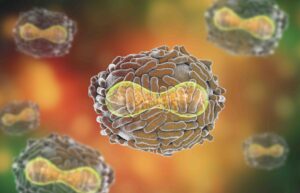 Besides natural strains, what if the Variola major virus (pictured left) were genetically engineered or combined with another deadly virus such as Ebola?  And what if the incubation period were shortened to a few days? Smallpox could spread rapidly, making it difficult to control. In Ecuador a Russian virologist from the Vector Institute near Novosibirsk, Siberia, defects to the US, and the CIA funds him to work at a university research lab in Bogotá, Colombia. His previous work in Russia had been finding a way to combine the smallpox with other viruses, and dispersion on warheads, to infect large numbers of people.

The new coronavirus, like smallpox, and along with dozens of other viruses, could be genetically manipulated and set loose in the world. It is no longer difficult to manipulate strands of DNA or RNA, and small labs can perform these experiments. The lessons learned from dealing with Covid-19 should encourage governments to prepare for future viral threats. But then, so should have the lessons from previous pandemics. As years pass, our memories of this virus will fade, just as have those of smallpox and Spanish flu.

The Biological Warfare Center and the Jim Johnson series.

Pandemics, viruses, and the world’s greatest viral killer -smallpox  alongside antibiotic resistant bacteria, play a part in all of RS Perry’s adventure novels. Jim Johnson, aka Dr Johnson, aka Colonel Johnson, and his sidekick, Brush, are supported by skillful red-headed Sheilla, their mission director, the wild-haired genius biochemist Nusmen, elite hackers, Misa and Vidya, ex FBI agent, Glenda Rose, the gruff but lovable General Crystal, Heather the llama lady and Jim’s partner, and a host of other unforgettable characters, including the sexy and dangerous psychopath – Najma.

Armed with a Ph.D. in microbiology and combined with his background in Special Forces, the protagonist, Jim Johnson, is sent on many missions. His primary job description is to investigate and stop biological threats, however, he laments that often times his missions are more as hired gun.

OFF THE EDGE BY RS PERRY – PASAYTEN WILDERNESS…

Llama Packing in the Pasayten Wilderness area in north central Washington State on the Canadian Border provides a way to see this wonderful wild area and take some of the comforts of home, such as a bottle of wine, a large tent, a queen-size sleeping bag and even frozen food. Llamas are great company and allow you to leave that 55 pound back pack at home. Llamas have soft padded feet and are gentle on the delicate mountain meadows. Of course they try to eat that meadow but they are grazers and pick at many of the sedges and grasses doing little harm to the environment if they are moved on a regular basis. While relaxing on the mountainside among the lupines you might consider reading Off The Edge as a way to spend part of a sunny summer afternoon. You might even be sitting in the exact spot where Heather or Jim sat in the novel.