Scientists have warned for years that the overuse of antibiotics can lead to the creation of bacterial super-bugs resistant to our most potent treatments. Because of the rising death toll, it is presently hard to envision something worse than the novel coronavirus pandemic. But with the rise of dangerous bacterial superbugs it is not only possible, it is probable.

Like viruses, bacteria present a threat to the world population. Bubonic plague, or the Black Death—caused by the bacteria Yersinia pestis—killed an estimated 50 to 200 million people in the fourteenth century. If antibiotics had been available and the Y. pestis bacteria had not developed immunity, the bubonic plague might have caused little damage to the human population.

We have become accustomed to antibiotics curing us. Health care workers and scientists are aware, however, that this is changing. There are several bacteria that are now resistant to antibiotics.

Warding off the Plague.

Antibiotic Microbial Resistance (AMR) bacteria have become a major global health concern. To most of us, AMR is no more on our radar than coronavirus was a few months ago. Just like viruses, bacteria are here to stay. And while they have been subdued since the arrival of penicillin, their suppression will not necessarily continue. 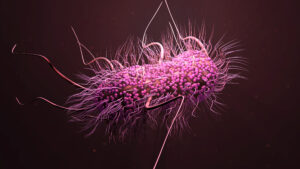 In 2016, a mutant antibiotic-resistant Escherichia coli bacterium (photo left) was found in a Pennsylvania woman’s urinary tract. Finding only one patient with such a bacterium might not seem significant, until one realizes the E. coli strain contained a gene known as mcr-1, resistant to colistin, the antibiotic of last resort used against Gram-negative superbugs.

“The fear is that this could spread to other bacteria and a bacteria resistant to everything,” says Dr. Beth Bell, director of the Centers for Disease Control and Prevention’s National Center for Emerging and Zoonotic Infectious Diseases.

Bacteria pass on their genes through lateral gene transfer. In other words, bacteria can give their resistant genes to other bacteria. If antibiotics have no effect on them, there is nothing to stop them from multiplying and infecting others.

“The more we look at drug resistance, the more concerned we are,” says CDC director Dr. Tom Frieden. “The medicine cabinet is empty for some patients. It is the end of the road for antibiotics unless we act urgently.”

In Off The Edge, the weird genius biochemist Nusmen develops an antibiotic-resistant Staphylococcus aureus bacterium. He accomplishes this not by genetic engineering, but by laboratory acceleration, i.e., he simply treats his bacteria to a continual stream of different antibiotics. The few bacteria that survive each round multiply until, eventually, the only bacteria surviving become resistant to all antibiotics, including the vanquishing drug for Gram-positive bacteria – Vancomycin. In RS Perry’s the adventure-thriller series, the secret Biological counterterrorist group dubbed Nusmen’s bacterium the Nusbug.

Like all living entities, bacteria seek ways to survive. In the world of hospitals and clinics, antibiotics are sometimes dispensed indiscriminately, and resistant bacteria persist.  If one superbug is controlled, another stronger and more resistant to microbes might, inadvertently, adapt and survive. Something similar happens with Nusmen’s lab experiment with Staph aureus bacteria.

When we apply antimicrobials to our kitchen counters, we kill the susceptible bacteria and leave others to multiply. Soon, only the resistant bacteria remain.  If, for instance, the bacteria left to multiply are Salmonella, they could prove dangerous and even deadly. 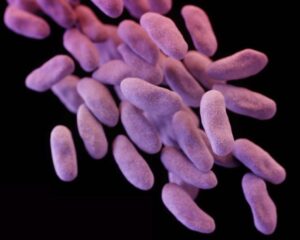 Mutations—a change in the microbe’s genetic code— can also take place, allowing selected organisms to survive.  This can occur when viruses and bacteria make a small error during division.  These changes, or mutations, are often inconsequential. As with the mcr-1, however, certain mutations can help organisms survive and proliferate.

The centuries old Neisseria gonorrhoeae, the bacterium that causes gonorrhea, now seems to be evolving into a superbug. Recently, gonorrhea has shown resistance to the last remaining treatment, Ceftriaxone.

Mycobacterium tuberculosis, the bacterium that causes TB, is becoming resistant to isoniazid and rifampicin, the components of the recommended multi-drug treatment for the illness. Multidrug-resistant TB (MDR-TB) poses a serious threat—the revival of a grievous disease that we assumed to be part of our history and not part of our future.
(Above) Carbapenem-resistant Enterobacteriaceae (CRE) bacteria is pictured in this medical illustration provided by the Centre of Disease Control and Prevention.

The above are only a few examples of the increasing list of antibiotic-resistant bacteria. Scientists are struggling to find new antibiotics, providing the time for bacteria to acquire the resistance necessary for their survival. Could an antibiotic-resistant superbug cause the next pandemic? Only time will answer this question.

More likely, many diverse resistant bacteria will cause an increasing death rate throughout the world. Current worldwide death rates from drug-resistant bacteria are estimated at 700,000. The annual deaths in the US are 23,000 and in Europe 33,000. According to a recent statement from the World Health Organization, “Antimicrobial resistance is one of the greatest threats we face as a global community.” 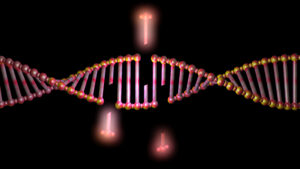 With the advent of molecular biology, the process of inserting genes, genetic engineering, into bacterial DNA has become widely and effortlessly performed in laboratories. The costs of setting up such labs is well within the means of many groups or individuals throughout the world. Laboratories possessing the ability to manipulate the genetic code much more rapidly than in nature and with potentially more exotic and deleterious results could introduce a lethal bacterium into the human population.

As we did with emerging novel coronavirus 2019 (Severe Acute Respiratory Syndrome – SARS CoV-2), we will likely remain complacent until one of these bacteria causes death and suffering on a large scale.

RS Perry
RS Perry is a writer, scientist and adventurer who has sailed across the Atlantic in a small sailboat and been to the bottom of the Pacific in Alvin, the Woods Hole deep submersible. When he is not studying microbes and early life at Imperial College London, he can be found organizing the UK and European Space Design Competitions. He is a screenwriter and member of the Writers guild of America West. Dr Perry loves the Earth’s wild areas, flying, diving and exploring deserts. Before doing a late PhD, he owned a remote ranch in north central Washington State. Educated at the University of Washington he received a Phd in Earth Sciences and a NASA certification in Astrobiology. He has published widely in geochemistry, microbiology, origin of life, linguistics and education. In his spare time he likes to paint.He received a National Science Foundation International fellowship to the University of Oxford and was awarded a Royal Society Fellowship at and Imperial College London where he remains as a Senior Research Scientist. He splits his time between Northern Michigan and London.
Adventure books Bacterial Superbugs blog post bad bacteria RS Perry